Mahindra KUV100 just launched in India today at a starting price of 4.42 lakh (ex-showroom) which goes all the way up to 6.76 lakh (ex-showroom). One of the most highly-anticipated cars in India, the latest Mahindra sub-compact SUV is the home-grown automaker’s third sub-4 metre vehicle here.

KUV100 will be available in four variants – K2, K4, K6 and K8. Mahindra KUV100’s design is inspired by its elder sibling, Mahindra XUV500. The KUV100 gets a monocoque chassis, much like the XUV500, and also sports quite identical styling cues. The front fasica looks beefy and aggressive, thanks to the large black plastic cladded front bumper and the muscular bonnet with sharp character lines. Furthermore, Mahindra KUV100 also gets a sleek grille with tooth-like chrome inserts flanked by a pair of uniquely designed head-lamps with follow-me-home lights and DRLs. Then there’s also a pair of LED fog-lamps with chrome inserts and a two piece airdam housed in the front bumper. To further KUV100’s SUV-like bearing, Mahindra has added features like black plastic under-body cladding, roof rails, large silver skid plate at the front and a tall-boy stance. With that being said, these features are for aesthetic purpose and have no actual usage, especially considering the fact that the Mahindra KUV100 offers a ground clearance of only 170mm. To help you gain some perspective, the Renault Kwid gets a ground clearance of 180mm. The KUV100 also dons some sharp character lines on the side along with 14-inch multi-spoke wheels wrapped with tubeless radial tyres.

Moving on to the rear, it manages to look quite neat; it comes with a rear spoiler, a pair of wrap-around tail-lamps and reflectors. Inside, the Mahindra KUV100 is offered with two seating configurations – a standard 5-seater and a 6-seater with bench seats at both, the front and rear. However, though the fabric seats look nice they seemingly lack thigh support. One must note that, to offer that additional space at the front row, Mahindra has infused the gear lever with the dashboard, while the pull-type handbrake lever has been placed at the base of the centre console.

As far as features go, the Mahindra KUV100 gets an infotainment system with a 3.5″ display screen, in-built driver information system, Bluetooth audio & Hands-free call, USB, AUX, steering-mounted controls, 4 speakers and 2 tweeters, Mahindra Blue Sense App compatibility, tilt adjustable three-spoke steering wheel, and height adjustable driver’s seat among others. Mahindra KUV100 also gets a cup holder on both front and rear arm rest, and additional storage space at the foot of the rear seat and under the front bench seats. In terms of safety, it will get ABS, EBD, and an engine immobilizer as standard provisions, along with the optional dual airbags.

Under the hood, the Mahindra KUV100 will be powered by an all-new range of petrol and diesel engines, the mFalcon series. The petrol engine, mFalcon G80, Mahindra’s first ground-up engine, is a 1.2-litre unit that churns out 82bhp and develops 114Nm of peak torque. The new 1.2-litre oil burner, mFalcon D75, is a turbocharged common-rail diesel engine that puts out 77bhp along with a peak torque of 190Nm. Both engines will come mated to a 5-speed manual gearbox. Interestingly, the carmaker currently has no plans to introduce an automatic transmission. Disclaimer: All posts and opinions on this site are provided AS IS with no warranties. These are our own personal opinions and do not represent our employer’s view in any way.

This article currently have 5,218 views 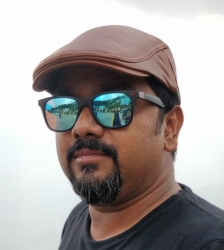 Follow me
Saugata
Founder at Internet
I am an IT Professional with 13+ years of experience in Windows, Storage, Backup, AWS and Azure. I love writing scripts using PowerShell. I loved to share my experience with rest of the world via this blog. I love my Echo Dot (3G). I love playing with Raspberry Pi.

This work is licensed under a Creative Commons Attribution-NoDerivatives 4.0 International License.

This site uses Akismet to reduce spam. Learn how your comment data is processed.

EASY TO INSTALL = Difficult to install, but instruction manual has pictures.